*Atlanta, GA: Bear, pining for his owner who isn't coming back for him 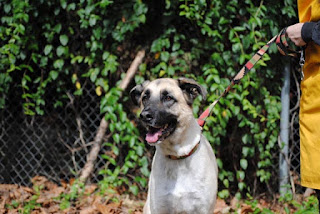 10-11-12   Rescued!!!
Bear is really sweet and very confused. On the day he was surrendered to Animal Control he was so excited - oh yay, daycare. But now he just sits at the fence watching and waiting and no one is coming back for him.
It is heart breaking to see.  Bear is very adoptable.  Please give him a chance!
Bear is a 4 ½ year old male shepherd mix that was surrendered to the shelter on 9/28 by his owner.  His owner had to get rid of Bear because her father is terminally ill and she had to move in to take care of him.  Bear is housebroken and he is good with other dogs.  He walks well on a leash and is pretty laid back once you get him outside.

The shelter has tried several GSD rescues but they aren’t interested, saying he isn’t purebred.  It’s hard to tell for sure what he really looks like because he has recently been shaved.  Who knows what his coat will look like when it grows back in.  The shelter has Bear listed as a German Shepherd mix but he looks like he could be an Anatolian Shepherd mix.
He’s been at the shelter since 9/28 and as an owner surrender his time is already up

If anyone is interested in fostering him and buying him some time to find a home or rescuing him, please contact Joyelle Jones.

We keep telling him we are trying to get him out!
Bear ID # A446872
Please Contact:
Joyelle
Fulton County Animal Services