Bodie's First Day Home
Nearly three years ago, I adopted Bodie. I was hoping to give him the best life possible after I found out what the first part of his life had been like.

He was born into a hoarding situation, in which he lived for two years. His life was one of filth and squalor, and he lived off of Oreo cookies that had been thrown into the yard for all of the dogs to fight over. When the property was investigated, they found he trusted only the dogs in his pack. From there, he was taken to a non-profit rescue organization, deemed healthy and adoptable, and subsequently placed in a foster home for a year. However, no one wanted him because he was fearful, anxious, and timid, and to make the matter worse, the children in that family didn't like Bodie. They teased him mercilessly, and wanted him gone. When I overheard that on my visit, I decided right then that I was taking him, regardless of his issues.

Bodie has made great strides since the day he became part of the family. He was a constant gentle companion to his brother, Bishop, in the final months before Bishop's death. And although he is still a bit anxious around others who visit the house, with lots of love and some training he has learned to trust that no one will hurt him, and therefore will allow people to be close to him.

Over time, Bodie quickly became adjusted to his new lifestyle with me. Some of his favorite activities are camping, fishing, going to the dog park, and hanging out at Dog Beach! He's so wanting to return to the activities that make him most happy!

Please scroll below to read about Bodie's injury, and the costs associated with it. If you would like to help Bodie, please feel free to make a donation. Each dollar you donate will be spent solely on Bodie's ongoing medical care! Any amount is so very greatly appreciated! Bodie and I promise that your kindness will be paid forward!!
A ChipIn or Paypal is available for your convenience at the following link:  http://mysite.verizon.net/res1640b3/

Bodie's Injury:  On November 10, 2012, we went out for the evening, and when we left, Bodie was, for all intents and purposes, fine. We got home about six hours later and found Bodie unable to walk correctly. He hobbled around in a squatting position and wagged his tail. As I attempted to help him, he did not yelp, cry or howl upon my touch. We immediately rushed him to the Doggie ER.

At first sight, the veterinarian on duty said he was sure it was a ruptured, bulging or degenerating disc in his back, which needed to be confirmed by a MRI. The news was not good. It was a rupture into the spinal canal with compression of the spinal cord, and there were two options: surgery or Euthanasia. I told 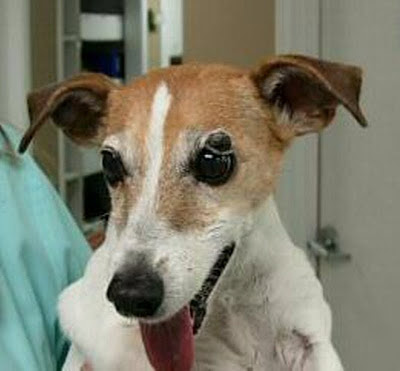 Update - Biscuit is losing her temp foster, and is now BEYOND URGENT. She was staying in a cold outside kennel, but now she has nowhere!!! Please someone step up for her!! If you can help, please email
This is Biscuit. She is 15 years old, spayed and heartworm negative. She has her tail docked and is only 15 lbs. She is very sweet and a total lover. I also believe she is housetrained. In the picture she has a mole on her eye but she no longer has that, it has been removed. Our vet checked her out and she is healthy and heart is good. The owner brought her in to have her put down because he didn't want her anymore. He has had her since she was a puppy :( We begged him to wait and we will find a place for her. She is also great with other dogs. If you can help, please email LAURENBETHEA82@GMAIL.COM.

Charlotte, NC: Rookie on the way to the shelter for being too loving 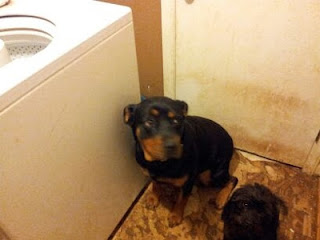 This sweet 2-year old Rottie girl wants nothing more than to share all the good things that come with being part of a family, but the family she is with wants her gone immediately so she is headed for a kill shelter.  Decide for yourself and please help us save her.  She sounds wonderful and just wants to be included. Taffy has taken up her cause and will be the contact - there is no time so act quickly, please! 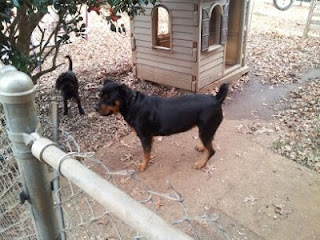 Can anyone help? My husband has a co-worker that can't take care of her dog anymore. I know, I know. Why do these people get dogs to begin with? It kills me. Anyway, here's all the info I have on her. Need to find her a home ASAP.
Owner was going to take her to shelter but she told us that the shelter said they'd put the dog down. Ugh. Please please can everyone send this out? She is located in Charlotte, NC and I'm willing to help with transport if needed. She needs the dog gone asap she said or she will have to take her to shelter where she will be put down.  Please contact me if you can take her, or know who can.  Thanks to all
Contact Taffy
mermaidsrock2004@yahoo.com

Here's info from owner:
Her name is Rookie. She turned 2 years old, October. She has been fine with the kids other than she doesn't know her own strength and will jump on them and knock them down. She barks at night until I bring her in the laundry room, then she sleeps all night. She is house broken. She is very strong. I can not take her on walks for this reason. She has developed a motherly bond with my shitzu. She is a great dog. I just can't control her and my back yard is not enclosed. She needs to run. Not spayed and the last rabies record  I have expired August. no vet visit records since then.

Lafayette, TN: Ellie was struck by a car

Ellie....... Was hit by a vehicle Friday night... She was taken to the vet, x-rays  were taken, vet advised Ellie has a broken pelvis and must be confined and was placed on Meds . Her vet bill has been paid.

Ellie needs out of the cold shelter and off the concrete floor. I need a rescue to step up for her or a foster parent.
Folks she can not stay in the shelter in her condition.  It is too devastating for her. She needs an angel to give her a quiet, warm and secure place to recuperate.   Please cross post and share.