Miami, FL: Dedicated Rescuer needs help for Shadow and herself 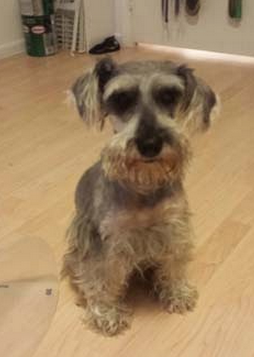 Aimee Lonczak was my right-hand in rescue for a good long time until her health issues and those of her Dad intervened... Now she needs some help saving Shadow - a dog she pulled under my contract six years ago from Miami-Dade (2008)... Shadow has had a history of illnesses from day one and has overcome them all in great part thanks to Aimee and her daughters' care and strength.

He is a member of their family. Aimee has a heart of gold. She had to fly out at 5am on an emergency flight TO NJ as her Dad has to be hospitalized again. Not a good sign. And this with her health poor and two elementary school girls. This is her story - in her words - and I KNOW every word to be true.

I have attached a photo of this sweet boy who continues to fight the good fight and deserves to be well. We are a village in rescue - and right now Aimee needs our village to help out - wherever you are. Thank you so much.
Shadow is now back on IV and injectable antibiotics.
Kathy Papresq, Miami, FL
bowwwowfl@bellsouth.net

From Aimee...
Shadow was rescued in November, 2008 from MDAS. He was a matted mess and no one wanted him covered in fleas and ticks which is the normal for there. I was away and I remember having him brought to my house and my maintenance man let the puller put him in my house until my foster could come and pick him up. Lo and behold, my husband came home first and was shocked none the less to find him there and me in N.J. He was a surprise for my Ava who use to walk around with a Schnauzer statue bigger then her.

Shadow has had his fair share of medical issues since being broken out of jail in MDAS. He has a heart murmur and cataracts. Then, one horrible night Shadow got so sick in the middle of the night, he was vomiting, had diarrhea, and was foaming from the mouth during the night so he was rushed to the vet where it was touch and go, only to be hospitalized for over a week and diagnosed with HGE. Shadow came home on special food and medication which was quite costly. We were on a good road and then another set back right before Christmas. It broke my heart to watch my Ava cry in her cereal hoping he would make it. 10 days later, my little fighter made it and came home to us! We have had very many smaller setbacks, but he kept fighting.

In June my dad almost died and I had to be in N.J. to take care of him for 7 weeks. While at my dog sitters, Shadow got sick from another dog. After many antibiotics, blood tests and a culture, we got the worst news ever - Shadow had Ecoli. I opted to treat him instead of put him down. The I.V. and the antibiotic injections where killing his liver and kidneys, he cried for my daughters. He had to be locked away from them because he was communicable to them and the other dogs, yet he fought it and won… only to have continued onset and explosions as we kept fighting another culture. He is Ecoli free now, but now he has Phsdomonis a bacterial infection. More antibiotics.

Today yet another explosion. Shadow needs more treatment. I have spent upwards of over $1000.00 and still have have a balance of almost $1000.00 and that is with my Rescue Discount. He still needs more treatment. Shadow has not given up his fight and I have not given up on him. He is eating very well. He’s active, alert and playful. He still has a lot of life left in him, so if you are able to please help him that would be very appreciated.

I know times are hard, if anyone can give up that one cup of Starbucks it will make all the difference to him and my daughter Ava. Over the years, I have tried my best to help so many animals all over the U.S.  I have fostered for many of you, pulled and transported for many, and let so many others use my contract to pull under. I have even had to be the bad person and come and pick up some animals for some of you who weren't able to send angels over the Rainbow Bridge with my two little girls.

My reputation does stand for itself. My daughters have spent many hours sitting in MDAS with me to rescue and save so many innocents, like the Distemper outbreaks in the 100 degree weather; they sat in my truck for hours. If anyone can help, I would appreciate it from the bottom of my heart. Donations can be made directly to the vet: