HAVING LIVED THROUGH PAIN AND ABUSE, THIS SWEET DOG IS NOW ON DEATH ROW & URGENTLY NEEDS RESCUE!!! 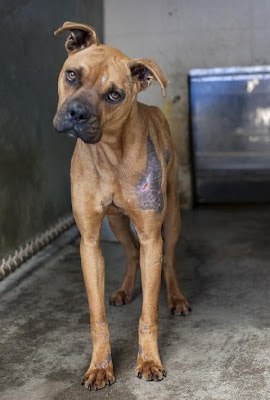 Ironically, his name is Happy. Happy is bearing the scars of a very UNHAPPY life. He was found wandering alone & picked up by animal control; he now sits defeated, awaiting his fate on death row at a kill shelter. He is covered in scars, some appear to have been deliberate burns as his skin is blackened & leathered. Despite what torture he may have endured, this boy is amazingly sweet, patient & gentle. Happy gets along with other dogs & loves people. He is a 2-3 yr old Boxer mix, weighing only 39 lbs, heartworm negative.
VIDEO: http://www.youtube.com/watch?v=wwzrDFm71Zs&feature=youtu.be 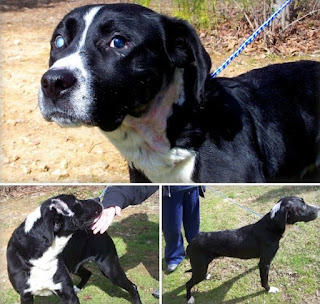 MARLEY UPDATE from Noah's Ark:  Our Sweet boy is finally beginning to trust us. A week ago this dear boy was still hugging the floor like his life depended on it. I am sure in his past life, it did. He will now allow us to love on him and will stand up and walk without crawling across the floor. Miracles happen every day. Marley is a Miracle. We are now on our third week of taking care of him. Every day, we see a little more progress. This is a boy that gave up long ago and is having to learn to trust all over again. His physical wounds are healing beautifully. His broken Spirit is slowly being restored. The way he walks and stands now is not out of fear but of optimism. Marley has an appointment in one week with a Specialist to see if we can restore sight in one of his eyes. We love and adore this wonderful boy and will be with him every step of the way on his Journey. The Heart and Soul of an animal needs to be cherished and nurtured. We love and cherish having Marley in our Noah's Arks Rescue Family. Thanks for your support and helping us save him. YOU ARE HIS ANGELS. (click READ MORE below to cont.) 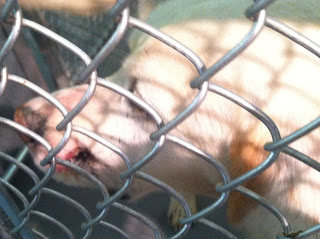 Some still waiting for a name and they're quickly running out of time, maybe a week or two. Please share, cross-post, foster, adopt.... whatever you can do to help.
Please call the shelter today at 804-493-0869 to adopt. MORE HOUNDS HAVE BEEN BROUGHT IN - PLEASE HELP!!
>>>>>>>>>>>>> He's a sweet old male hound with a hole in his face. It goes clear through to his teeth! The vet put peroxide on it. He has sad, mellow eyes! We don't have a number or other photos yet, but please return or email the contact for more information. He will be available for adoption this Friday Feb 23. 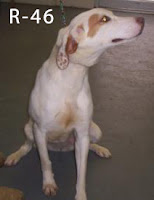 <<<<<< #7 is a shy little girl has only a little time left to live unless someone rescues her. Her mom was a small framed hound but not sure what breed her dad was. She is ready and waiting for a new forever home. She is a great age to adapt to any new home environment. Please call the shelter today at 804-493-0869 to adopt. Her Petfinder link: http://www.petfinder.com/petdetail/25328904

ROSE #R-46 is sweet girl -UPDATE: Rose is safe at pets with disabilities. She just adores attention. She is such a beautiful girl, would prefer not to be a hunter but just a love bug. She is missing 2 toes on her front foot, looks like a birth defect, but it doesn't slow her down. She needs a sofa to call her own and a family to love on her.  MORE ABOUT #R-46: Pet ID: R-46 • Primary colors: White or Cream, Red, Chestnut or Orange • Coat length: Short  Petfinder link: http://www.petfinder.com/petdetail/25329094  >>>>>>>>>>>>>>> 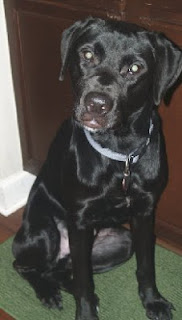 This beautiful Black Lab mix was rescued from a kill shelter but is headed back there unless someone will help him. This  guy really needs a home. One of his present owners is threatening to send him to a kill shelter and the wife is desperate to find him a good home.
Rocky is a 1.5 year old lovable black lab mix. The owners got Rocky as a rescue and rehabilitated him to perfect health. He is current with all of his vaccines and is looking for a happy forever home where he can be loved and taken care of as a member of the family. Rocky is a potty trained inside/house dog who loves to play but will lie beside you as you rub his chest or as he chews on his bone. Rocky knows many verbal and signed commands such as sit, stay, lie down, leave it, come here, and wait for it and a number of other commands that the current owners will be happy to show you. All of Rocky’s belongings are included to make his transition easier for both him and his new owners.
CONTACT:  Nicole: coliebklyn86@aol.com  704-819-7515 or Josephine: 704-706-3732 or 704-699-2289 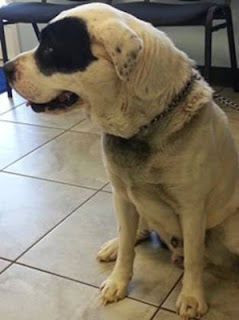 Friendly, lovable BANDIT must find a new home ASAP - a sweet inside dog now kept on a chain outside.
MEET “bandit”!! His family cannot keep him anymore due to financial reasons and downsize moving with no back yard. They did just pay to get his Heartworm test (negative) and update his shots. He is not neutered. He weighs about 68 lbs. He loves people and friendly with even strange dogs. (Not so happy with the vet taking blood though but who is.)  He was inside dog and housebroken until just recently and now is kept on a chain outside. Poor big baby!

Please contact Joan Roseberry at 704 619-2004 or ((dogwooddesigns@bellsouth.net)) if you can help and rescue him.
ST.BERNARD MASTIFF MIX; 2 YEARS OLD – UNALTERED MALE – HW neg
UP TO DATE ON ALL VACCINATIONS; ONLY 68 LBS!  FAMILY MUST DOWNSIZE TO A HOUSE WITH NO YARD AND CANNOT KEEP BANDIT; NEEDS RESCUE OR A FOREVER HOME!  CONTACT: JOAN ROSEBERRY - 704 619-2004 ormailto:dogwooddesigns@bellsouth.net)) 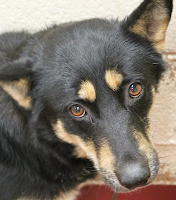 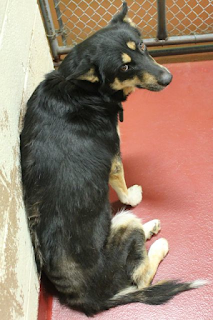 ABANDONED, SCARED, SHE DOESN'T UNDERSTAND WHY.... BUT HAS SO MUCH LOVE TO GIVE

*From a Volunteer:  I am sending out a plea for sweet Gerty. Gerty is scared & bewildered at the shelter. She is in quarantine at FCAS so she has NO chance of making it out of the shelter unless a rescue intervenes for her.
Gerty was picked up as a stray on 2/7. She was actually abandoned at the dog park in Piedmont Park. FCAS was called to pick her up but she was so frightened that the officers couldn't catch her. They had to place a trap in the park to catch her. Now she's at the shelter & she's very scared. I spent a considerable amount of time with her last Friday & I don't know that she's ever known kindness. When I went into her kennel, she began to shake with fear. After a few minutes, I moved closer to her & reached out to pet her. At the first touch, she flinched. She wanted the attention but was frightened, still shivering. Slowly, she began to inch closer & closer until she could lean in & give me kisses on my hand & face. After 20 minutes, she was lying next to my legs on her back for a tummy rub. Amazing that a dog that has been so neglected can be so forgiving.

I stopped by to see her again on Tuesday & she remembered me. She came up to the kennel gate, ears back & tail tucked, but giving kisses. After a few minutes in the kennel with her, she was on her back again, asking for a tummy rub. I have seen her several more times over the weekend & each time she has shown more & more excitement when I went in her kennel. Sunday, she even went down in a play pose!  Gerty is a beautiful shepherd mix with white socks on her front 2 feet. She's a medium-sized dog, approximately 45 lbs. We believe she's 2-3 years old. She's very calm & has been good with other dogs. She is in quarantine because she has hair loss above her tail from flea infestation. She is also HW+. :(   Gerty is a sweet soul who deserves a chance to know love from a family of her own. Please help!