Her time is up, but this sweet dog just wants to be loved. Please hurry! 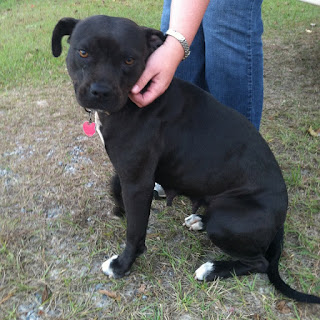 $100.00 donation to approved rescue that saves this sweet girl!
*from Laurie:  Around Thanksgiving, this extremely sweet girl appeared in a neighborhood in Cuthbert. Acting like a puppy, she would jump in cars wanting to go for a ride, scare a neighbor's cat because she wanted to play with her, and aggravate people because she wanted to play with their dogs when they took them out to walk.
One lady had to feed her cat on top of the car to keep her from eating the food. They said she showed no aggression or animosity toward anyone or anything. It was just her puppy-like behavior that disrupted the neighborhood.
The lady that called the city to pick her up cried because she hated doing that to her because she is so sweet.

Her luck hasn't improved. The couple that take pictures of the pound dogs and place them in the paper and post them on the internet have been extremely ill. They are the pound dogs only link to the outside.  They were unable to do this, and now her time is up. The city has agreed to give her one more week.  Her rabies tag, shown in the picture that was taken before she went to the pound, was traced to a Boykin spaniel. His owner said that his dog had lost his rabies tag.

She is in good condition except for a small sore under her neck that was caused by her collar. She's probably 1 1/2 to 2 years. I'm judging her age by her looks and behavior. The kennel was locked and I was unable to look in her mouth. She's obviously had a litter of puppies. Please contact Laurie at (lfmontfort3@gmail.com) or 229-732-6958 or 229-310-5064.