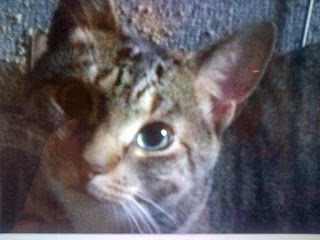 
SAD UPDATE for CHURCH KITTY~AKA NOAH
July 6, 2015 NOAH NEEDS a SAVIOR!!!!!!!!!!! AKA Church Kitty!
Originally called " Church Kitty" due to him being abandoned in a carrier at a Church... His story was hopeful after he was taken in... albeit an attic... he was safe... FUNDS were raised to have him FULLY VETTED and Neutered and Tested...and we even found a temporary foster who would take him in directly from the vet's office... Today named NOAH... 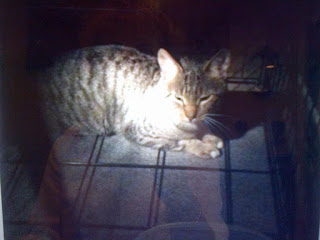 Noah needs a HOME...he is a sweet boy whose history we do not know...he has been through tremendous stress and doesn't fully trust...yet! His foster home is not going to work for him b/c the woman is rarely home...she has many pets of her own to care for AND at the midnight hour, her sister needs to move in for a month or so with her 7 cats!!! He butts his head and loves petting...until he doesn't...and then he will give a little growl...he is not a lap cat as of now but his transporter <https://www.facebook.com/barbara.dornau> Barbara Dornau who was with him for an entire day feels that he could become one... What we do know is that Noah needs a deserves a home...a HOME where he will be loved for who he is...around 2 years young...he is a healthy little guy who has been though a lot! IF a shelter becomes the only option...he will NEVER be adopted. Please contact tssh1@optonline.net (Trudy)