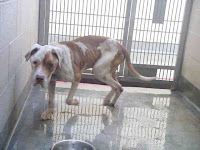 R E S C U E D!!!
UPDATE: PLEDGES NOW AT $495 PLEASE HELP SAVE THIS GENTLE SENIOR DOG - HIS TIME IS ALMOST UP AFTER 60 DAYS. Hoping a rescue can save Marco/ Rescue pull fee is $40 and includes the neuter.
VIDEO: http://youtu.be/rnNmDrzQjVM

He doesn’t have a last day but he is quite urgent being an 8 yr old pit and having been there over 60 days now … he has a week max I would say if we put our name on him. EXTREMELY URGENT!!!
WHO IS HE?  A1273324 Marco is an 8 year old Male tan and white American Pit Bull Terrier who was found as a stray on DECEMBER 21st and brought to the North Central LA City shelter. Marco had a possible owner who never came for him. Weighing 55 pounds, Marco is a sweet old boy who is calm and loving. Marco was around a lot of other dogs at our photoshoot and he seems good with other dogs. Marco is a love who desperately wants to be back in a home. All North Central animals come spayed/neutered, microchipped and with full shots (including rabies). Pet Harbor Listing: http://www.petharbor.com/pet.asp?uaid=LACT4.A1273324
WHERE IS HE AND HOW CAN YOU HELP? For more information about this animal, call: North Central Animal Care and Control Center at (888) 452-7381
Ask for information about animal ID number A1273324