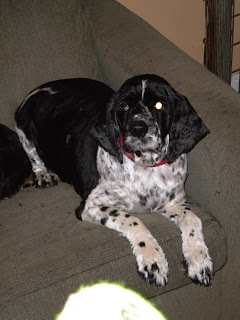 A true Christmas miracle, thanks to Tara!
Here is what she just sent:  "Lucky for Oliver. he was transported to south carolina cocker rescue where he was placed in a loving home with a nice couple who owns other cockers. He is gonna have all his medical problems taking care of. he is already a loved member of the family. Thanks for your help and interest God bless
Tara and Oliver"My name is Oliver, For five years, I was my owner's best friend.  We went everywhere together. I took care of him and he took care of me.  My owner passed away and so I had to move, but they just threw me in a dark cellar by myself with noone to play with or take care of. I am blind in one eye, but I can see just fine with my good eye.  After several months of living like this, a nice lady climbed down the ladder and took me out of there...well, I'll let her explain:

Three days ago I helped rescue an older Cocker out of a basement cellar. It was not a finished basement and to call it a basement at all is wrong. it was more like a cellar with dirt floor, dark and damp.
This older dog was forced to live down there all day and all night. Never to be let out to use the bathroom, his sat in his own filth. He lived to eat and was only given the bare minimum to keep him alive. He was overfed and given water. No daylight or light at all. To get to the cellar there was a ladder, no stairs, so only with assistance could this dog  leave his hell hole.
Yet, it was not always like this. For five glorious years, this dog was life and heart of an elderly autistic man. He went everywhere with this man. He was even a service dog for emotional support. Anywhere this man when the dog wasn't too far behind. He was groomed regularly, fed a normal diet and just plain good old fashioned loved. The man grew ill and sadly passed away. This is when this Cockers life took a turn for the worst.... 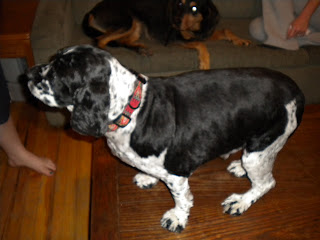 He was to be sent to live with the old man's wicked daughter. She, for whatever reasons, did not really want the dog and put the dog in her cellar. There, he languished for 6 solid lonely months. It was not until the smell of the dog reached the main floor of the home and in-laws noticed. One such family member who reached out to me as I groomed her cavalier regularly.

So, being a dog lover, having a cocker of my own and always owning cockers, I could not say no. I freed him from his torment but only to realize he now has physical damage that needs some nurturing. His emotional damage was not damaged that much. He is loving and thankful for everything you do for him. Never aggressive and loves everyone and any kind of animal. He is well-mannered and housebroken.
He has bad ear infections with alot of, maybe, scar tissue. You can tell when you look in his ears, there's been a lot of neglect. He is blind in his left eye. Maybe an old injury but who knows. He seems to see ok out of his right eye. He was fully matted when I brought him home. I took him to my grooming shop and gave him a makeover which took four longs hours. Never once did he complain. He, now, from lack of care, has severe dry skin. He is also tremendously overweight. I think his weight is due to the fact the only thing he had to look forward to was the once a day opening of the hatch to feed him.
If you have a heart, will you open it up to him? I will do whatever I can to get him to your rescue. We are in New York. I would also offer to foster him while he gets treatment if you are short with foster homes. I have no one to help me with him and his needs are beyond me.