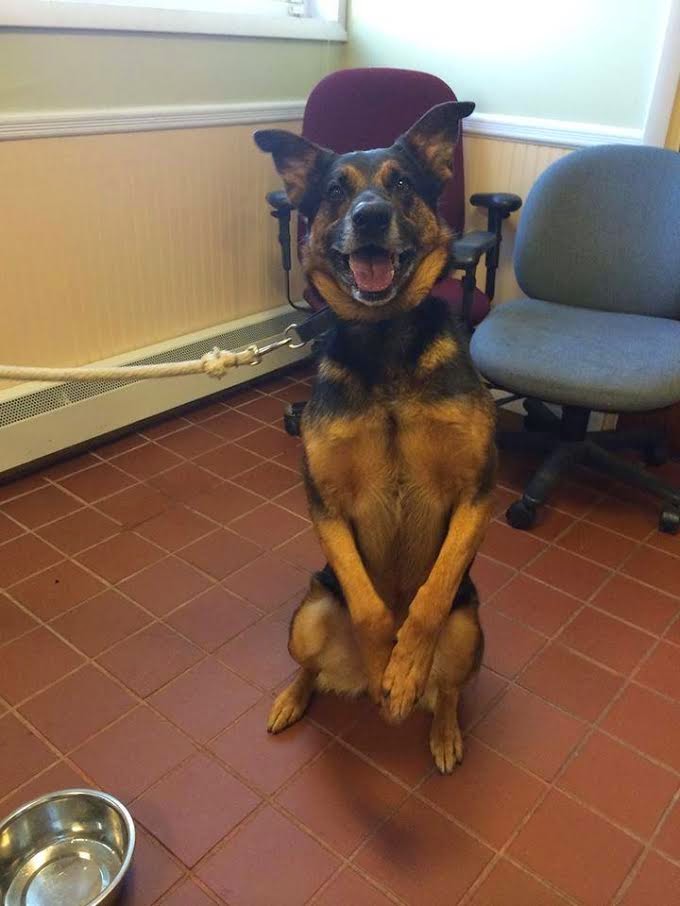 Sweet Rex is begging for a loving home after being in this shelter for nearly a year. Please open your heart and your home for this boy.
Nov 26, 2014 Long Island NY *KILL SHELTER***

*From T:  Meet Rex! Rex is a 6yr old shepherd mix who came to the shelter after being abused by his previous owner. He will do best in a home in teens and up and as the only dog in the home. Don't let his age fool you as he is an active boy who loves walks and he is a quick learner who will do anything for a tasty treat, like sitting up on his hind legs! This boy is waiting for the love he so desperately deserves and is patiently waiting.

To Inquire about REX, anyone interested should call the shelter. I suggest you ask to speak directly with the behaviorist, Laura Garber at 516-785-5220, ext 4632, since she knows Rex the best.

REX has languished at The Town of
<https://www.facebook.com/TOHAnimalShelter> Hempstead Town Animal Shelter in Wantagh Long Island. Volunteers have made me aware of his TERRIBLE PLIGHT there and here it is:
"If anyone would like to know how a shepherd mix like Rex can languish in the Hempstead Shelter for nearly a year, the answer is simple. There's no effort to highlight his progress on their Facebook page, nor does it depict the day to day reality for these dogs (AND cats). The public has NO IDEA that Rex has been working very hard at being a "better" boy, so just MAYBE someone will give him a chance. I'm watching dogs who were considered adoptable, are now demoted to "red" dogs....meaning they are deteriorating due to the complacency of the new leadership, and his failure to replace crucial vacancies. Also, when the shelter stops prioritizing "image" over animals. That's when pets will get adopted at events. The public and rescuers are given a false impression that there's no "urgency" to adopt from TOHAS.

TOHAS is a government shelter and at any given moment, those lives could be at stake. Where are rescuers flocking to, driving right past TOHAS to Brookhaven, because they love the Directors vision, humble attitude and personal effort (her heartfelt, open letter went a very long way). On top of that, she's doesn't compete against the very people she relies on to offer a second chance to dogs like Rex, because she knows that there comes a point where he will finally give up. Rex doesn't need flowers on his head, he needs a sign hung down around his neck that reads, "SHOW ME THE MONEY." How much more does this beautiful boy need to say????????

PLEASE Give REX the HOME he deserves...it is HOLIDAY TIME!!!