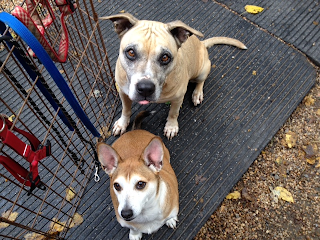 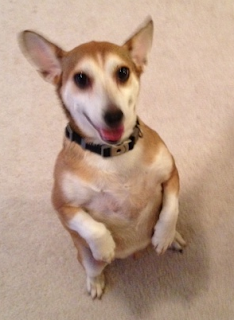 11-18-13: These two little souls still need a place to go. Please don't forget about them continue to network for them.

MIA AND RALPHY, PULLED FROM AN ABANDONED HOME NEED YOUR HELP DESPERATELY.


*From Mary: RECENT UPDATE: We have also discovered that Mia is most likely deaf and dear sweet Ralphy has mast cell cancer. I've been balling my eyes out all day. They will not have the tumors surgically removed because they still do not think he is adoptable. I looked it up though and if it is stage 1 or 2 and the tumors are completely removed he has an excellent chance of pulling through and the cancer not coming back. This is almost too much for my heart to bear.

You can contact me any time. I can usually respond within a few minutes.
Mary Weber
mary.ammerman@gmail.com

THIS IS THEIR STORY:  In early August, I pulled two loving seniors (a 12 year old pittie mix named Mia and a 9 year old corgi mix named Ralphy) out of a condemned, abandoned home in my neighborhood. The owners of the home were heroin addicts, one was in the hospital for an overdose and the other was incarcerated for robbing someone at our local Wal-Mart in Martinsburg. They had three young girls under the age of 12--they were
picked up by relatives or placed in a foster home. But no one was there to take
care of Mia and Ralphy and the other animals they left behind - a domestic short haired cat named Shadow (now in probably the most loving foster home ever) and a bunny rabbit in an absolutely filthy cage (who was returned to the young girls per their request). These poor animals were living in filth. There were feces, flies, and trash everywhere and an entire basement dedicated to the production of marijuana. The house was being foreclosed and the water had been turned off back in May. I received permission from a relative to take
responsibility for Shadow, Mia, and Ralphy.

I spent one night with Mia and Ralphy in my basement prior to taking them to a local kennel while I figured out a plan for them. They were the cutest, sweetest dogs ever. They took care of each other, licking each other's faces before curling up in a doggie bed together. I'd never seen anything so adorable. Unfortunately I could not keep them at my home because Mia did not get along with my two dogs and my foster dog at the time. I got them vetted and boarded them for two weeks while I begged rescue after rescue to take them in. Finally, one did. However, this particular rescue only offers outdoor kennels for their dogs and crates to sleep in at night. I knew in my heart that this would be very stressful on these two seniors but with no other offers on the table and money running short (this all happened the first two weeks that I was unemployed), I took them there and bawled my eyes out the entire way home.

The latest update from the rescue was not good. They said that Ralphy and Mia are doing so badly there that they will be euthanized if I can not find another reputable rescue or home for them to go to. They were willing to give me 2 weeks. This is week 2 and I have had no luck finding someone to take them in. Several rescues have posted their situation on their sites and Facebook pages in hopes of bringing more attention to their plight, but none have had any room for them.

As stated above Mia does not do well with all dogs but may be better with ones that are smaller / similar to her pal, Ralphy. Ralphy did fine with my dogs when they stayed here. While they both lived with a cat, Mia did show an inclination to chase them when we visited her last Monday. Both are fine on a leash. Ideally these two would go to a home with somewhat dog savvy parents, and either no other pets or an easy way to separate them if needed. Both travel well in the car. Mia loves jumping in but is hesitant to jump out. When I transported her, I had someone (other than myself) come up to greet her happily and she jumped right out. Treats also worked but she would take longer to make the jump. Neither have any health issues that I am aware of other than Ralphy who could stand to lose about 10 lbs. They both adore personal attention (who doesn't?) and long for a stable home and a warm, soft place to lay their heads at night.

The oldest of the three young girls from the abandoned home contacted me not long ago asking what had become of her animals. (Her dad had threatened to take them all to animal control and have them euthanized a number of times, so I think she was trying to make sure that's not what happened.) I assured her that they were all in wonderful caring hands and that I would do my very best to make sure they went to wonderful forever homes. I truly feel responsible for these two dogs, not only because I bonded with them and they are sweet as can be, but also because I made this promise to this young girl about her family pets.

If anyone has room for these two sweethearts or knows of a reputable rescue in WV, VA, PA, OH, DC, NJ, MD, or DE that might be able to help, please let me know as soon as you can. I will pay whatever costs are needed, will transport them anywhere, and will do everything I can to save them. If you think you might have an adoption coming up that would make room for these two in a foster home, I may be able to temporarily foster them or I can move them to a very nice personal boarding facility right in Martinsburg where they did well before. I am begging for help with these two sweethearts, please help me save them.