*Lafayette, TN: Willard doesn't understand what he did wrong.. 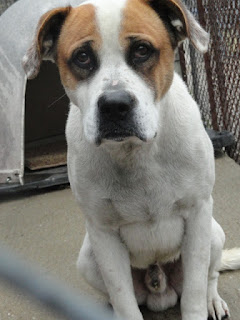 11-30-12:  Willard was adopted by a gentleman who works for the U.S. Humane Society and they are a match made in Heaven!

Thankfully, he was removed from a home of abuse, fed and comforted so he no longer cowers in a corner and cries, but unless someone steps up to give this boy the home and family he deserves, he will be euthanized on November 23rd.  Willard, someone out there needs you as much as you them..we are trying, baby boy.

Willard, male , 2 yrs, 74lbs, not neutered, was extremely mistreated and starved, neighbors stated he was beaten daily for no reason, removed from his former owners last week, AC is feeding him three times a day now, he only weighed 50 lbs when he came into the shelter.  He's really relaxed now, very happy, walking on a lead now, loves being around the other dogs  at the shelter , he was extremely scared when he arrived at shelter, he would try to hide in a corner and cry.

Folks, Willard deserves a chance, surely there's someone out there for him. I sure hope someone will step up for him, you won't be sorry, he's a very grateful dog and shows it.