*Tarboro, NC: Please don't give up on Bear! 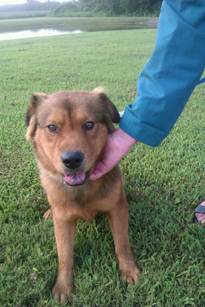 11-30-12  One week ago, Bear was finally flown to his forever home in Jacksonville, Florida.  His best friend is a little white bundle of love named Coconut and he is slowly learning to trust humans again.  His new owner needed Bear as much as Bear needed a new family.
Another plea for Bear, Aussie/Chow mix.  He just knows his perfect family is out there and he is ready to be part of it.  He is such a good, good boy.

Bear was in the shelter in Edgecombe County, curled up in the corner.  When I approached him he tried to hide, I touched him, he flinched as he thought I was going to hurt him in some way.  I picked him up, he was limp with fear.  I took him outside in the play yard to walk him around on the leash.  He relaxed a little but was still very afraid. Every time I touched him he flinched.

He was picked up as a stray so I have no way of knowing what torture he endured in his early days.  Normally dogs like this are euthanized as soon as their hold is up, but something about Bear is so special, I didn't want to give up on him.  He is heartworm negative, neutered, is up to date on all shots and in very good physical condition.

He's been in a loving foster home for a month learning to trust humans.  He has a couple of canine friends that he loves. He gets along extremely well with other dogs, children and cats.  He's not happy being inside, just loves hanging around outside with his buddies.  I knew his foster was temporary and it's time for him to move on to a home of his own.  Please share this with anyone who might want to have Bear in their family.  He lived with me for two weeks prior to his going to a foster home, and he's so easy to love.  He's around forty lbs, medium, has an Aussie tail.  Precious boy.

Someone told me he was Red Heeler, so be it, but he has an Aussie tail, sweetest dog in the world!!!
Thanks, please network for me.  Peggy