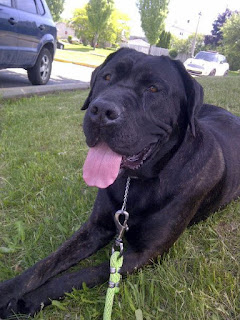 Abandoned to wander in the streets, then rescued by a wonderful family..... Now Gina has been diagnosed with cancer. Please Help this gentle giant and her family fight this disease - Each and every dollar can make such a huge difference to them.
NOTE: The Chipin is titled "Olive's Back Surgery" but it will go towards Gina's surgery as well.

CHIPIN: http://olivetheshihtzu.chipin.com/olives-back-surgery
*From Lisa:  Our beautiful Gina is a purebred Cane Corso Mastiff. She was rescued around the same time as Olive. We were doing transport for a group that pulled Gina on the day she was to be euthanized. She never made it to the rescue group ... with their blessing, we took Gina home.

I lost my heart dog, Sara, to DM, in February 2011 at the age of 12.5. Though we help as many dogs as we can, I had a hole in my heart the shape of Sara that another dog never seemed to fit into in quite the same way. Until now. Although Gina is double Sara's size, she fits into that hole. I would be devastated to lose this special baby, this awesome gentle giant, whom I swear is human, after having her for only 2 months.

I always wondered how anyone could have given up this dog, who was found as a stray (which is impossible as anyone who has ever met a Corso will tell you), but I soon discovered the reason. Gina had a lump on one of her mammary glands. Some asshole dumped her, with cancer.

After testing and hoping for the best, I found out two days before my wedding that my beloved dog had cancer. It was almost more than I could bear. It is not mammary cancer as she had been spayed but it seems to be a liposarcoma.

We received an estimate today from the veterinary school and the whole thing (tests to stage the cancer, excision surgery, etc.) should cost between $1800-$2100. We are still reeling from Olive' surgery and our wedding. Truly, if we had known about the dogs then maybe we would have cancelled the wedding party, even though it was one of the best days of my life and it came after some hard suffering on my part. We did not know about Gina soon enough and we had already spent the money on Olive's surgery so now we are really hoping for some donations.

It is very odd for us: we rejoice when we see Olive walk and run and we know she is a miracle, then we see Gina and her tumour is visible when she stretches out all 122 lbs of herself.

I am hoping for a miracle by September 10, when we have Gina's appointment.

These dogs were no one's dogs, but someone cares about them now. I hope you all do too.