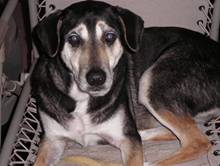 Lovely Update from Sarah:  I am happy to tell you that Bandit will be moving soon - to his new Kentucky home!! We are currently figuring out next steps to move forward with his HW treatment....

Thank you to everyone who helped by crossposting his story--
it worked!! Also, thank you to those who emailed and called to check on his status, and to those who offered to foster. Everything came together all at once. It was amazing!
On behalf of his foster, Jaxon....Thank you, Thank You!!

This is Bandits story
*From Sarah:

On September 30, 2011, Jaxon found Bandit at a bus stop. Not sure if the owner left him there, hoping that he would catch the next bus out of town, or if he ran away from home. He was chipped and several calls were made, to the owner, but they never called back.  Bandit was healthy when he was found, so we believe he had not been on the loose very long. Jaxon took him home to his apartment and has been caring for him ever  since, but things are changing quickly and we need to find Bandit  a home as Jaxon cannot keep him much longer (Jaxon is losing his own home). Bandit is now current on his shots, is  neutered and ready to go to a new home. He weighs about 48 lbs, is around 5 to 6 years old and is good with cats and dogs and possible kids.  Bandit has a great personality and is a sweet and calm  and loves to play every chance he gets, which is not too often.  Money will be collected to help get him treated for heartworms.
I would really like to see this sweet boy have a second chance in a loving home.   We have tried very hard to place him somewhere around Atlanta but not having much luck. When Jaxon loses his apartment, he will have no choice but to take him to animal control, most rescue groups are full.  The situation does not look good for Bandit, and that is why I am reaching out for help, I’m hoping someone will see him and fall in love with him.

Thank you for taking the time to read Bandit’s story, Sarah