Richmond, VA*** Robbie, yellow lab mix_Stuck in a kennel for over a year!***

This precious boy has been rescued!!! 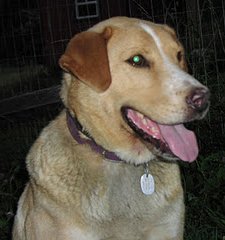 *From Sherrie: This boy really needs a foster home.  Does anyone know of one who could help him out?  He is a perfect candidate for a family dog!!
WHO IS HE? ROBBIE -- *From Dee:  He's a big frame Yellow Lab mix, about 7 yrs old, about 65 lbs, he was acquired as a puppy from a neighbor who's dog had a litter. He was a family pet for several years, played with her kids, was in the house, etc.  recently he's been tied outside a lot, as her situation has changed. He has only known his owner/family his entire life, so he was scared and upset when she abandoned him.  He's been at my house now for about a year, and now he's going stir crazy in his kennel.  He really needs a foster home, where he can interact with people. He's friendly, outgoing, loves people, follows me around, comes when he's called, will sit for a treat and loves his rawhide chews. He doesn't like other male dogs, but behaves himself at outing events. He has a current rabies vaccine, and utd on vaccines and HW preventative. I don't remember his vet but will check his paperwork, think he was only seen for his initial neutering and shots.  He's active and playful, and seems younger than 7 years.  WHERE IS HE? Richmond, VA  HOW CAN YOU HELP? contact Dee Hawkins 434-531-4355, britdog15@aol.com