Please help change this sad story to a happy one for little Chip, a paralyzed, almost forgotten doxie. 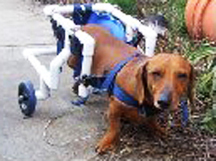 WHO IS HE? Chip is a 6 y/o dachshund, UTD on all vaccines, neutered and special needs (paralyzed- needs expressing) that was neglected for most of his life.
WHERE IS HE? Connecticut
HOW CAN YOU HELP? Contact Toni Diamond if you are interested in adopting.  Tkdiamond@aol.com or call her at 856-498-8166.

Chip has the saddest face and eyes I've ever seen. They speak volumes and tell the story of a life that has been very heartbreaking. He is not demanding, he is grateful, he wants nothing more than LOVE. 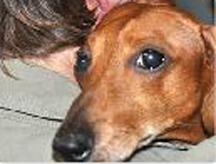 CHIP'S STORY: Chip is six years old but I don't believe there was any time that life was easy for him, even before he became paralyzed. His life in a home with a family did not last long because when he fell off the couch and became paralyzed, his family did not want to keep him.  He was posted on Craig's list and quickly found another home - but that home also was short lived.  In only a few weeks he was posted on Craigs List again because his care was more than this person had bargained for.  And, so Chip was picked up by a rescue from North Carolina and placed in what they believed to be a great foster home in Queens, NY.  The person who fostered
Chip collected money monthly from the rescue for his care....he was a paycheck.  Little love or caring was provided.  Details about his existence would only break your heart- so, we will only post the obvious;
1.  Chip was never vaccinated in the two years he spent with ...
his foster.  In fact, he received NO MEDICAL care whatsoever during that time!
2.  Chip had physical signs of neglect.  He had jagged bite wounds that were left untreated.  He had a leg seriously infected from dragging himself around with an open wound. 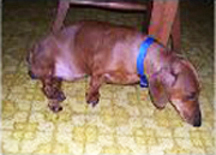 3.  Chip was filthy and the wheel chair he had come with was taped together and just as filthy
4.  Chip starved for human contact and affection.  He was sad and depressed and trembled with fear but begged for love.
5.  Chip's two years of EXISTENCE with the foster was a LONG LONG time to be just "forgotten" day in and day out! 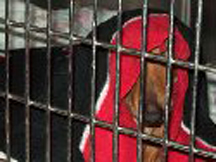 The day I picked up Chip I had asked that he be seen by a vet and vaccinated.  The foster knew I was coming, overslept because he was out late the day before and ran out to have him vaccinated at the very last minute so I would be sure to pick him up since I said that would be required.  Each and every time I tried to connect with the foster about arrangements to get Chip I was not able to get him, and when I finally connected the story was the same......working day in and day out, never home, no time!!!  What about two years of collecting foster fees for Chips care and not providing anything but a roof and food?  What about being humanely responsible and caring?   What about Chip- who demanded nothing but some love and care?  What about the commitment you made when you agreed to foster Chip?

I can't imagine being left in a home, paralyzed day in and day out.  I can't imagine what such an existence for TWO FULL YEARS WAS LIKE!!  I can only tell you what I saw when I picked Chip up and we held him in our arms for the two hour trip to Top Dog (NY to CT).  I can tell you he had the saddest face.  He had the sweetest and quietest disposition.   He was not demanding.  He was grateful for warm arms that finally held him.   He wanted nothing more but to melt into your arms and have you LOVE him!

I just wanted to hug him and tell him that everything was going to be alright...but, I would have been lying.  Everything was NOT going to be alright...Not without someone to give him a home.   Because, he would once again just be "existing".  This darling, soulful, polite little brown dog would again patiently wait, day in and day out, for someone to care about him once and for all. 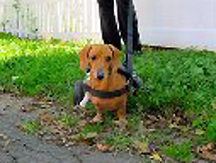 Chip broke my heart.................but, not because he is paralyzed, but because it is so damn obvious he had seen very little love and affection in his life!!!

Chip wants to be "just your dog".  He wants to go on livin' and play the hand that he's been given.  He needs someone to care for him now more than ever, it's true...For there are things he just can't do.  It's embarrassing, a little that he may need your help to piddle.  But, if roles were reversed, he'd be proud to be your nurse.  But, hey....he has the ability to love you unconditionally!  Give up?  Well yeah, like never!!!  He does not regret what cannot be, he'll just be himself and he's still the same within his soul where it counts....he's still whole!!!  His legs are lame, but in his heart he's still the same!!!!! (Julie Wrigley Smith)

*From M: Chip has been vetted and  looked over from top to bottom to be sure he's healthy.  He is up to date on all vaccines and he will come with his very own new wheelchair (that we are working on donations for).  DO YOU HAVE ROOM IN YOUR HEART AND YOUR HOME FOR THIS LOVING SWEET BOY?  HE WILL DEFINITELY BE WORTH ANY TIME AND CARE THAT YOU GIVE HIM...............BECAUSE I CAN ASSURE YOU HE WILL GIVE BACK SO MUCH MORE THAN HE GETS!!!!
Please reach out to Toni Diamond if you are interested in adopting Chip. She can be reached at TKDiamond@aol.com. For a good home I will make arrangements for Chip to be transported. And, if you don't have room or the time, please share this beautiful dog everywhere!!! It should be his time in life and I know he will be utterly appreciative of ANY KINDNESS!