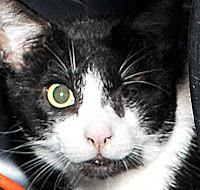 *From Linda Abbott: I AM THE CONTACT. CALL me at 310.686.9010 or email me at linda@rescuerailroad.net  THANK YOU.
WHO IS HE? Male black and white cat, 5-1/2 y/o, one eye, steel plate in jaw. Read his story below. WHERE IS HE? LA, CA
Tuxxy's STORY:  Before you know anything at all about Tuxxy, you must know 3 things...  1. Getting hit by a car was maybe the best thing to ever happen to him, strangely enough.  2. HE TALKS! CONSTANTLY!  3. He LOVES other cats. and people too! Even when other cats are MEH or even mean to him, that doesn't stop Tuxxy from trying to make friends! Never a hiss nor a growl nor sour look, Tuxxy just wants to have friends!

I relocated Tuxxy to a friend's house because my landlords said I
could no longer feed the strays/ferals here. I took one in...
one
sadly died, one has been adopted, and there is a fifth one who is
back here again, 8 days after escaping during transfer from trap to
cage at my friend's house (I will be re-trapping him soon).

I'd thought Tuxxy was semi-feral but would come around with time,
but I had no time to work with him, so he went to my friend's house
to live there as an outside feral-type. For two weeks Tuxxy sat
patiently in a cage in the garage, then was finally released. He
lived there happily for a couple weeks then moved down the street to
live somewhere else, and was happy there too.

On April 17, he was hit by a car (that's what the injuries seemed
to indicate) and showed back up at my friend's house. He hadn't seen
Tuxxy in a couple of weeks, but put some food out for him. He
thought the kitty looked kind of bad (from a distance), but he
didn't realize how bad-off he was. A few hours later he walked into
my friend's house (he leaves his back door open during the day) and
went all the way to the back, to my friend's bedroom, where he stood
in the doorway as if to say, "Dude, please help me."

He had surgery for eye removal and to fix his jaw. he's doing fine
now but the vet bill and additional expenses totaled $1585.00. And
by the way, he's NOT feral. Not at all. He's about 5 years old,
neutered, tested negative-negative, and is a sweet and loveable little boy.