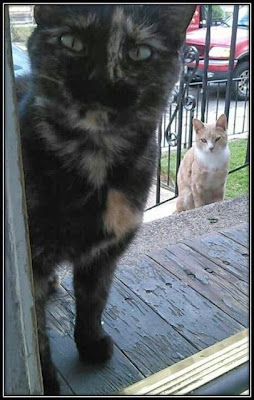 The neighborhood delinquents are threatening the cats. Read their story below…

Oct 9, 2013 CHESTER, PA
From a Kind Hearted Woman, CONNIE:
Connie is hoping to find a home for these two abandoned cats...ironically they were from separate HOMES but they have BONDED together in their search for Food, LOVE & Shelter...They ...are EXTREMELY FRIENDLY and Begging to Come In...
Call Connie OR LISA: fallinangell25@gmail.com
610.990.2208 or 610.872.8325

“Hi, I live in Chester, Pa (between Philly and Delaware) and I am desperately looking for a rescue who has room for two adult cats who we're thrown onto the street at different times but have teamed up together and formed a tight bond.
The first one is a tortoiseshell female, she was put out onto the streets when her owners son had to be hospitalized "supposedly" the doctors said it was because he was allergic to the cat. I have since gotten her spayed when i did a TNR program with forgotten cats, she also was given her rabies shot. She is a very girly girl cat (if that makes any sense)she loves to be petted and she loves to play but doesn't like to be picked up. She won't scratch though, if you happen to pick her up, she just will jump off of you the minute you let go.
The second one is a beautiful orange and white male. He was put out of his home (I'm thinking) a day or two after we ended TNR. His owners have since moved away but he continues to meow and scratch at their door to be let in. I also believe he was abused! When he first appeared he was skin and bones and very afraid of every movement and sound. I have since worked with him and he is now trusting of people again and will do the funniest things to get your attention so you will pet him. But he also breaks my heart at night when the other cats come to eat, one cat in particular , a BIG tom cat is always beating or trying to beat him up, or chase him off so as soon as he sees him coming he runs up to our porch door stands on his hind legs and looks in at us with a look on his face that we can't resist so we let him into our screened in porch until the other cat leaves. He is also fond of other animals, he loves to hang out on the ledge of our porch while our four cats lounge next to him on the other side of the screen. He is also great around our small dog.
I just feel really bad with winter coming.. Although they both always have access to food and water I worry about them staying warm because where they have been sleeping is under our snowball bush and i know they have to get cold since their little bodies aren't used to the cold weather and they are both small with not a lot of meat on them. Another thing that worries me is the fact that every time we go to walk somewhere both cats are behind us, following us, and it is nearly impossible to get them to stay here until we get back so we wind up standing in the middle of streets while they both take their time to cross every street. It's cute!! But around here it's very unsafe!!
And another thing we worry about is the kids around here, and also the neighbors because the one neighbor has sprayed them with raid on more than a few occasions because they were on her porch and another chases them with a broom. and because the cats don't leave the front of our house the kids are always messing with them trying to scare them either by stomping their feet at them or by throwing rocks at them and the list continues.. we have also found cats dead in the past because of these kids.. We (my family) have gotten into many arguments with parents because of their kids trying to harm these cat, so please if you have room or even if you don't but may know someone that does please let me know!?! Thanks
You can either email me back or you can call 610.990.2208 or 610.872.8325 and ask for either Lisa or Connie.. Thank you!