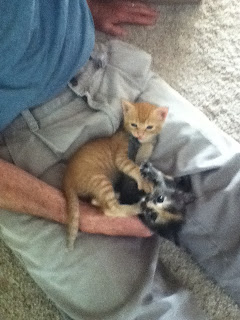 In her own words, read the story of a rescuer's final save and help her find a perfect home for these miracle kittens.  I dare you not to be touched to the core by Samson and Delilah
The call came in to Concerned Citizens For Animals of a mother who   had not been seen and babies with their eyes still closed. Nothing   more other than an approximate location was given.  The emailer gave   no information of themselves and when we tried to contact them we got
a return mail response.

I rushed over to the church with the empty parking lot looking for a   trash dumpster where the emailer said they would be found.  A teeny   orange kitty barely able to cry anymore  probably because he had been   crying for a day now was on the sidewalk.  He was covered in blood   and dried on sticky afterbirth.  Mama had just given  birth maybe a   day ago. Looking through the bushes I found another a tortie very   stiff unable to move covered in blood, I thought she was dead, but   their was still life in her.  Further inspection lead me to two more.


One was covered in maggots rigor mortis had set in and still another   that I thought was in that same condition a tortie was found. When I   picked her up she opened her mouth and tried to cry and she moved her   arms, but I knew she was too far gone.  The maggots were coming out   of her mouth, they had already claimed their prize.

I rushed to the vet nearby.  Euthanasia was what she told me to do.   They have less than a 1% survival rate and the little  tortie female   will not make it through the night.  They were covered in fleas and   maggots everyone in every orifice possible.  They also had never had   the benefit of any time with mother in that the afterbirth on them   indicated they had just been born and for whatever may have happened,  mama was gone.

I wanted to try.  The next morning even after Revolution was applied   the ears on the little boy were pools of  blood.  I had a suspect of   what it was and as I began to  squeeze maggots so many came out, I   thought he would never hear, and the vet confirmed it was a distinct possibility.  We all struggled those first weeks as any person has   been through who has nursed but struggled because the insects on them    and in their intestional tract had started their death toll. Enemas,   and ever sort of thing we worked to keep them alive, a true struggle   for these babies and alive we did.

We have reached five weeks now and my prayer through the feedings is   for one more miracle.  You see I have come to love them in a way that   I cannot begin to tell you.  But I cannot keep them.  My 80 year old   husband has some mental issues that are demanding more and more of my  time as he progresses through this disease.  I know I too will not   outlive these kittens.

I have been doing rescue now for ten years and this is my swan song.   I have seen some horrible things down south in my time and I have   seen some beautiful things with animals who have been given a second   chance at life.  But, this is so very difficult for me to do...  that is give these babies up.  But I love them enough to do that, for   I cannot give them the life they deserve.  This is a fitting swan   song for me because I have never , ever seen animals struggle to live   more than Sampson and Delilah.  They are extremely loving and   affectionate, sweet and tender, and they are an attestation to the   never ending will to live and the miracles of God.

Every night and day I am praying and praying for a very special home  for them.  They will be fully vetted when they weigh enough and have   no special needs.  Yes,    Sampson can hear........I live in Greenville, SC , but will transport absolutely anywhere in the US.