UPDATE: Vet is no longer taking donations as Thor was picked up today. (4-27-12)  *From Suzanne: "He has been moved from the smaller crate to a run and is getting use to his tri-pawd. I know he will be ok, he has a strong, strong will, a ridiculously strong body & his love for his family. With rehab & therapy, I have no doubt he will be just as mischievious and silly as before (possibly more so). I know he will still watch over my girl & now I will never get back my side of the bed."

Please, folks...look within and either donate as little as a dollar or as much as your heart and pocketbook will allow. Most of all...please circulate this heartwrenching story to help bring this family back to their life. Thor was brought into their lives for a very special reason and
they all need our help now.
Cheryl Poindexter, rescuer writes:
Thor had his surgery yesterday and has lost his leg. He's in allot of pain, but stable. The vet bill is approx $2,200 so far. We have only raised $500. If everyone on this list just donated $5 we would have it paid. God bless those of you who have already donated. Suzanne gave her first and last month's deposit on her house they were to move into to cover the first emergency vet. They really need our help. She has written a rather compelling story about Thor and the accident. I have included that below. Thor is very special and I want nothing more than for him to be ok again and to have a back yard to play in. He needs to go home. He can't till the bill is paid. Please help us.
Thanks, Cheryl P, Suzanne and Thor.

*From Suzanne:  Most of you know Thor (aka Roscoe) and his horrific past and I am not going to repeat it. What you don't know is that it was love at first lick with Thor & us. From the moment he stepped in our house, he knew he was home, he never looked back. His first night home he took my side of the bed & has yet to give it up. He will literally dogpile, legs splayed landing right on top of you to get your attention. He launches over the back of the couch (instead of the front or side) to sit with you. To my absolute dismay & pleasure he opens my pantry every night & forages, leaving trash
throughout the house which I have to pick up, as it is our morning ritual. I do feed him "Blue" 2x a day but you would never know it, he will counter surf & take anything in tongue range. 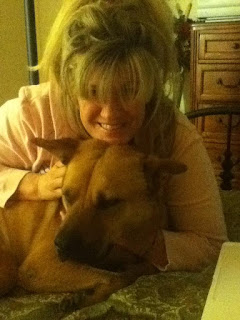 He can open drawers, take what he wants & then close them. I continue to ask him why he can't pick up his trash then? lol. One morning I woke up to Bisquick, a spatula & an egg on my patio (?) I asked him if we were having pancakes for breakfast. That's the Thor I know & love an overgrown puppy who has no idea he is a dog.

Since he has come to us, he has been deemed a "therapy dog" by my daughters doctor's as she suffers from seizures. from the moment he saw her & she saw him, I saw a change, I can't explain it I just knew. Hannah has not been seizure free since she was 6 yrs old, during our time with Thor she didn't have one in 5 months. He has this uncanny ability to know, when I see him lay next to her & put his head on her chest, I know what's happening & what his presence is preventing.

The day this tragedy occurred we had spent the previous 36 hours moving, we wanted a house so Thor could have a backyard. Needless to say we were exhausted, we stayed at Motel 6 as they are dog-friendly. I let the office know that we had a service animal, needed a bottom floor room & would not need housekeeping services. The receptionist assured me that their housekeepers DO NOT enter rooms with dogs only, feeling assured, we stayed.

We all slept for hours. Needing to give the owner the money for our rental, I didn't want Thor to be out in the heat so I turned the air up high & had the "Animal Planet" on for him thinking we would only be gone 30-40 minutes. (I have relived that choice a million times). When we left, there were housekeepers outside our room & I told them "no housekeeping", "perro (dog)", as well as displayed the "do not disturb" sign. Having no reason to be concerned as my folks stay at Motel 6 with their show dogs as does most of the circuit, we left.

We were a few blocks away & I realized I forgot the money so we went back only to see Thor out of the room. There were housekeepers freaking out yelling in spanish, we didn't know what happened and only knew we had to get Thor.

My daughter went after him and within minutes of him being on DeSoto he was hit by the semi. He couldn't have be loose 15 minutes, it is all still so surreal. After the impact he ran to my daughter (on 3 legs) and laid down in her arms. She was hysterical when I got to her, she was trembling, covered in blood & apologizing through her tears as she had witnessed his fate. All that was left of his foot/leg was skeletal bone and there was blood everywhere. Hannah was too hysterical to hold him (I didn't want him anymore upset than necessary) so I laid down next to him & he put his head across my outstretched arm and looked at me with those eyes I have seen a million times.

When the SPCA got there I was covered in blood but Thor was calm. Being that, given the opportunity he would have chewed his leg off, the SPCA allowed me to stay in the back of the truck to keep him calm. Covered in blood, holding back tears smooshed in that tiny cage, Thor never stopped looking at me & I promised him over & over that he would be coming home & he would have a yard to run in.

The first hospital demanded alot of money to even stabilize him & I gave them every dime I had $1500.00+, then they said the removal of his leg would be 6K of which I knew I couldn't pay. We were so lost & so incredibly sad. It was never about his leg, it was the possibility we would have to put him down, I don't know if my girl & I have ever been so incredibly lost. The house money was gone & now Thor?

Instead, I contacted Cheryl who called Blake who hooked us up with Dr. Werber. We took Thor (his leg still in a towel, they didn't wrap it) to Century City. At first Dr. Werber thought he may be able to save the leg, we didn't care, just save the dog. I looked at my daughter covered in blood, who I don't think had stopped crying and wondered how in God's name was I going to fix this? She apologized none stop for not catching him. How do you give peace back to a child after that? all that she saw & felt? I don't know, I still don't know.

The first night back at the Motel were seizure after seizure, her brain wouldn't give her a break. Today there were only 2, as Thor gets better so does she.

Thor apparently is a bit grumpy. He is up and walking on his 3 legs, giving his Elvis impression when he wants to go back to his cage & unfortunately is not eating. That will all resolve itself when he is home. He is heavily medicated, however still has the where with all to silently let the techs know to leave him alone.

Jindo's are known for the bond they form with one family, they have been documented to have traveled hundreds of miles thru large bodies of water to get home. Thor wants to come home.

I knew from the moment I met him that we would grow old together (I didn't know the effect he would have on my girl) but I should have. I swear, I will help him heal now & when he's to old to wipe his bottom I will do it for him. He just needs to come home. Neither my girl or I can imagine life without him as he made ours so, so much brighter. I am not sure who saved whom....

Thank you for reading and please, please help us make things right again.

All our prayers & thanks,
Suzanne, Hannah & Thor

Thor is feeling better, he wants to come home, I can see it in his eyes &  his face when we leave...from the day we were blessed with him we have not been apart, I have no doubt he is truly overwhelmed with the loss of his leg and confused by us leaving him there.

He has overcome so much in his young life, 18 mos of abuse before he came to us, this all is so wrong, it wasn't supposed to happen. We taught him how to fetch & catch a ball, all of his manners, sit/down/stay/come (he doesn't really come, he will stay in the down position til you go get him) lol. When he first came home I don't think he had ever slept on anything but the floor, cuz every night he would roll off the bed at least once or twice, then he would pop his head up with this confused look as if to say "whaaaaaaaat". I laugh for hours at him.

He has been moved from the smaller crate to a run and is getting use to his tri-pawd. I know he will be ok, he has a strong, strong will, a ridiculously strong body & his love for his family. With rehab & therapy, I have no doubt he will be just as mischievious and silly as before (possibly more so). I know he will still watch over my girl & now I will never get back my side of the bed.

God bless all of you, as he never would have made it without the help. We are still a ways away from our goal with meds, therapy & rehab, however we are getting closer, the days are getting brighter.

Thank you again, you all are the true heroes,