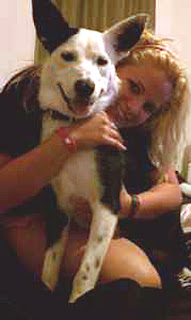 Desperate for temporary re-homing for her pets as she gets back on her feet after job loss.
THIS IS HER STORY:

My name is Kristina Johnson, I live in . I just recently found out I was pregnant and lost my job and my fiance’ was laid off. My fiance’ and I had to move into separate places and neither allows animals.

No one in our family or our friends on the "web" sees dogs as we do. I have two amazing dogs that I see as my children. In the middle of August all of this happened. We were initially forced to send our babies to a pound, and it was the hardest thing we have ever had to do. After 10 days of no sleep and many tears we decided we needed to get them out, and good thing because they were both very ill and scared from being in the pound.

Both of my babies lost a lot of weight and were very sick. $300 later we finally got them out. We had slept with them in my car for several days because we were determined to keep them. After about a week a woman replied to my post on craigslist and said she would take them. This woman has a small house and 6 dogs of her own. She took them in and cared for them and they are doing 100x better. Due to pack order disputes my dogs have been attacked and it is a daily thing for her dogs to get into it with my 2 dogs. The woman is going out of town at the end of October and we are forced to find another solution as fast as possible or I will be forced to give them up permanently.

As I have said these dogs are my children and I wish I could give them everything, but because of hard times I need to get back on my feet. I am asking if you can please foster my babies until mid/late January. I do have every intention on getting these dogs back. I am willing to get a letter notarized stating this if you would like. They both love children and have been around them their whole life. .I would owe you everything if you could do this for me and my family.

I am asking for /mid/late January because I feel that is plenty of time to get our lives straight before our daughter arrives in February. We would keep in touch and try to visit as often as possible. If you are wondering, I have tried everything I could possibly think of.   Finding a foster is my last hope.

I know this is a lot to ask, but I want you to know I do love these dogs and would never leave them if I had the choice. Following is a short bio on both dogs and attach are some photos. Please get back to me and let me know if there is anything you can do. Thank you so much and God bless!

Stella:   Female, 65lbs Lab/pit, 2 years old, not spayed (trying to get that done asap), all muscle )very strong and smart) loves adults and kids of any age. Alpha dog and doesn’t tolerate certain dogs (depends on personality).  Won’t share her toys or her food. She does test other dogs with food.  She will leave a tiny bit of food and walk away and see if another dog will go after it. She is too smart for some people. I have a cat.  She ignores.  cats for the most part if they ignore her. .Kennel trained and has her own large sized kennel.  Completely house broken.  Can be loveable, but more of a lone wolf.  (She is a big daddy's girl and is very lovey with her daddy.  He is her ball and jogging buddy and loves him to death). Her tennis ball is her life (She pics one and it is HERS for about 3 months). Does good on a leash and harness (She is very strong so if she is allowed to pull, she will, but listens to a slight tug). She is a little harder to control when we are not there, as she tends to try and jump over fences to come get us, but as long as we are around her she will not run. She will do anything for her tennis ball: sit, stay, come (she is ball motivated and not treat motivated) Very sweet dog… one just has to understand her.

Arson:    Male, 55lbs, border collie/german shepherd, 1 year old, not neutered. Loves adults, kids, dogs, and tends to chase cats. He is very submissive and just goes along with the group, but will stand up for his sister if she has conflict impacted by another dog. Housebroken -  in fact,  he  won’t potty in the house.  He has a minor chewing problem (puppy habit).  He is  kennel trained and has his own large sized kennel. Very loveable and thinks he is a lap dog ( a big mommas boy, is attached to my hip). He plays ball, Frisbee, rope - about anything he can catch,  he will play with, literally.

Has a little dog obsession (My two dogs had puppies and ,since then, he has been extremely protective over little dogs and likes to watch over them -  not to the extent where he is mean at all to people or other dogs, he just likes to be their best friend) He has his own leash and harness, but he has a bad pulling habit that we can not break no matter what we try. If he goes on a run before a walk he is much better. He can sit, stay, shake hands, high five, lay down. He is our "show" dog. He loves to show off.

These dogs are great dogs, despite some of their tendencies.  I would like to keep them
together for my boy’s sake. He was doing very bad for a while, not having me, and he finds enormous comfort in his sis.  She seems to try and distract him from being upset and scared.I know it sounds crazy, but they are not dogs… they are children and it really shows in their personalities.  They are not only brother and sister - they are partners and I strongly believe they need each other.  It tears me up enough that they have to go through this without their mommy and daddy so I'm afraid I can not have them separated.

There has to be a way that they can be together, they do great with each other and Arson knows what he can and can't get away with regarding Stella. They really are the most amazing dogs and have the most personality I have seen in any dog or person. I really hope that something can be done.

WHERE ARE THEY? Jacksonville FL
HOW CAN YOU HELP? Kristina's email is krisdewitt0720@gmail.com