TANNER IS THE FIRST TO FIND A FOSTER HOME...and then there were nine. 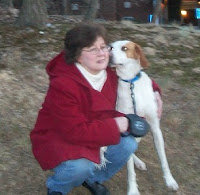 It was a dreary day outside, but I felt glorious inside!  I was on my way to pick up Tanner. Tanner is a 2 year old Tree Walking Coon Hound. He doesn't know it but his life had been saved the day before by a woman who loves hound dogs and had been watching the situation at Sussex County Pound in Stony Creek, VA. Urgent emails had been posted and cross posted among animal rescue networks.  They told of a shelter, a kill facility,  where even though they had free dog runs - these dogs were scheduled to be destroyed!?  If anyone can explain that to me - please do!!   Actually the vet had been scheduled to be there on the Tuesday right after Christmas, but due to bad weather he did not make it.  But he was definitely coming on Jan. 6,'11 - and the majority of dogs to die would be hounds.
I had been seeing the urgent messages with photos of the dogs and felt like I really wanted to save at least one.  Really I wanted to save them all but didn't really have the means to do that.  Who really does?  Well, Jessica, an independent animal rescuer in lower VA did do just that. She went to see the dogs and did not want any of them to die. When I made contact with her she explained to me that even with sponsorship money for some of them - rescue groups weren't taking. She told me that for some reason Hounds get treated rather shabbily.  If you asked her she would probably say that she doesn't know how she did it - but she did it. In 10 days She pulled 16 dogs. 6 before "D" day and 10 on "D" day.  The first 6 went to rescues, and she took the 10 to a boarding kennel. On January 7th I went and picked up Tanner who I will foster until he finds a really great home, because he is a really great dog.  Of course I met the other 9 when I went to pick him up and they are all great, sweet dogs.  Most of them are Coon Hounds. In case you aren't familiar with Coon Hounds let me give you a description.  This information is from the web site of the Northeast Coonhound Rescue which has been very helpful to us with these efforts we are making.


"Coonhounds make great pets because they are calm, gentle, and playful with families and other dogs.  Coonhounds  range in weight from about 45 to 70 lbs and come in a variety of types including, Redbone, Black and Tan, Blue-Tick, Treeing Walker, Red-Tick, and the Plott Hound.  Because they were bred to be hunting dogs, coonies have a strong prey drive and must always be contained in a fenced area or walked on a leash.  They need their daily exercise, but once they've had it, they can snooze for hours. Coonhounds are affectionate and love being with their people. Enthusiastic and eager to please, coonhounds are also sensitive Nothing looks more miserable than an unhappy hound dog.  As great snugglers, coonhounds make excellent companions when watching TV or curling up with a book. Coonhounds are a distinctly American breed of dog, bred by the early settlers who needed dogs that would tree their prey in the forested colonies of America, unlike the foxhounds who chased ground prey in the open fields of Britain.  They were bred from foxhounds crossed with other European hunting dogs.  George Washington and Thomas Jefferson both kept coonhounds.  The Disney character Pluto, with his floppy ears and tail, was based on a coonhound.  The expression 'barking up the wrong tree' originated in the 1800's and refers to a coonhound's hunting behavior."
My name is Karen and in the past couple of years I have developed a passion for helping animals.  I have a special interest in handicapped pets and my friends Christine, Pam and Jacqui, from www.handicappedpets.com have joined with me in trying to help these 10 dogs. I live in Va, but they live as far away as GA, TX and AZ - yet they are still helping these VA hounds!


Now we desperately need to find permanent or foster homes for these dogs as boarding is expensive. We are currently working to raise  funds in the event that they must be boarded a little longer and for some veterinary care and other necessary expenses. These wonderful people and more are helping with many things besides their own generous personal donations. We are researching rescue groups who might be able to help these sweet hounds, and preparing the info to post the dogs on the internet, writing this article for the Daily Tail, and Jacqui, an artist - who has helped us before with a beautiful red dog named Reva - you may have read about her here too!- is going to paint a picture of these dogs and donate the money from the sale of it.


If you think that you can help in any way - please contact us.  If nothing else please say a prayer to St. Jude, who is the patron saint of difficult situations and lost causes.  These dogs deserve good homes!
--  post written by Karen H.